October 1991 was our definitive introduction to Athas. The original Dark Sun boxed set was something never before seen. I marveled at Gerald Brom's art, covering the boxed set and the Rules Book and The Wanderer's Journal, as I poured over every word of Tim Brown and Troy Denning's unique setting. I was amazed at this new flip-book adventure format and the evocative artwork of Tom Baxa.

This was going to be my world. I had never DM'd a campaign before, but this was it. I read the boxed set and novels and then each supplement as it came out, but I always wanted more and I wanted to discuss it with other fans. I turned to the fledgling internet to find more of Athas . 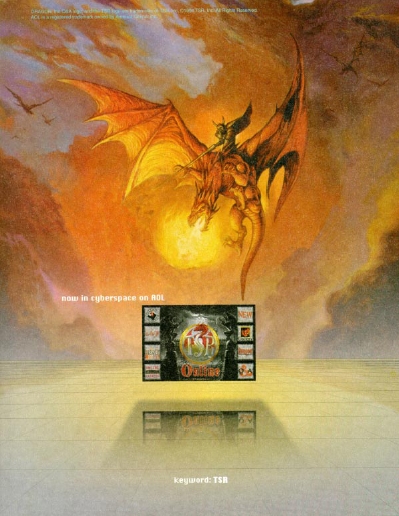 At this time, for me the internet wasn't really the internet, it was America OnLine. I quickly found TSR Online's portion of AOL and began using a web moniker, Chay0s, to interact with the fans. At that time TSR Online was mostly a series of message boards where you could make posts, but they were not nearly as fancy as today's forums. This was a place where fans could talk about the minutiae of the setting, bounce ideas off of each other and collaborate on projects.

While TSR Online was the starting point for me I'm sure those who were already more knowledgeable about the internet were talking in places like rec.games.frp.dnd and other ancient dial-up bulletin boards, not to mention places like GEnie and Compuserve.

For most my high-school years from 1991-1994 this was Dark Sun heaven, running home games and talking about them online at a pay-per minute rate.  The first Dark Sun Net Handbook was released in 1994, compiled by John Martz. In the introduction he says, " The DARK SUN Net Handbook, first edition, represents a collection of supplemental material written and compiled for TSR`s campaign AD&D setting DARK SUN.  I have solicited material for this tome from the    AD&D list (ADND-L@PUCC. BITNET), the DARK SUN list (DARK-SUN@LEICESTER.AC.UK), and the  AD&D news group (REC.GAMES. FRP.DND). " This was the first great compilation of fan material to the Dark Sun world. You can download it here.

Dark Sun computer games saw their debut in 1993 for Shattered Lands and then in 1994 for the follow up, Wake of the Ravager.  I mention these because they're digital, but they're not "online".

Starting in July 1994 there was a major disruption as TSR sent out Cease and Desist letters to many bulletin boards systems and ftp gaming sites. TSR argued that anything created with the basis of their work was copyright infringement and couldn’t be shared. I'll save you the details, but thankfully, after much fan backlash, TSR adjusted their stance a few months later.

In Sept 1994 TSR announced a licensed internet FTP server, MPGNet, that gamers could use. TSR also stipulated that any fan-made material add the following disclaimer to it "This item incorporates or is based on or derived from copyrighted material of TSR, Inc. and may contain trademarks of TSR. The item is made available by MPGNet under license from TSR, but is not authorized or endorsed by TSR. The item is for personal use only and may not be published or distributed except through MPGNet or SR. "

Shortly after TSR partnering up with MPGN a series of mailing lists started up for various settings of D&D, including Dark Sun. By this time all of the major settings were our and thus had their own mailing lists. These were active places where details of the world were thought about that only the most diehard fans cared about. For me, this is where a lot of creative energy for the Dark Sun setting went.

There was so much inquiry and so many questions about Dark Sun coming to the list that a FAQ was created by Sean Donohue in 1995. After Sean left the list Teos picked it up and was moderator for the Dark Sun mailing list. Many of you know Teos as Alphastream (he's still a Dark Sun fan and still very involved, check out his Wizards blog). After Teos, Athas.orgs own Chris Flipse picked up duties for the FAQ and maintained it until few new questions were added. You can find the last version(1997) of the FAQ here. 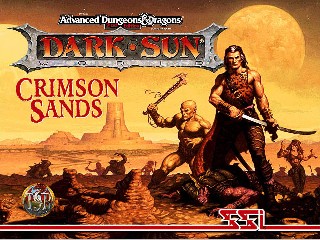 In 1997 the Dark Sun Mailing List that inspired me to make The Burnt World of Athas. In its original form it was on my members page on AOL (big surprise).  It was started, like all fan pages out of a love for the setting where I slowly posted Dark Sun relevant material. After it was established it began drawing some attention and contributors.

About the same time TSR moved away from AOL to rely fully on TSRInc.com. I imagine at that point much of what was on TSR on AOL had been moved to the MPGN FTP servers. What happened to all of the files from TSR Online? Only Sean Reynolds, the TSR webmaster at the time, knows, if even he does.

Since there were no official products released after 1996 the web community did a lot to continue the Dark Sun setting. Many websites were born and died in obscurity. You can find a role call of many sites and a great site itself hosted by Grummore at Siltskimmer.org

The Dark Sun mailing list was still going strong and we started a series of Dark Sun Net Projects to grow the world. In from 1997 to 1998 there was a weekly project hosted by a list member. Each project had a week or more in the spotlight for the creator to solicit responses and then compile them in some manner. You can find the archived version of the Net Projects page with some archived and some current links here.

1999 brought about a change for the Dark Sun mailing list as it was moved from the MPGN servers to Oracle.Wizards.com in September. You can still search archives from this point to the current albeit limited list posts here. The FTP and mail server archives from MPGN stayed online for some time, but as  of now are unavailable. 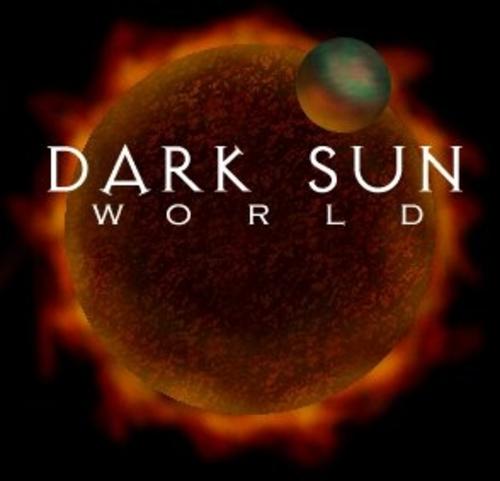 Additionally in 1999 there was a contest started for the Dark Sun NetLogo. WhileWizards of the Coast's new online policies were very lenient they didn’t want the official logo being used.  There were several great entries, of which I can only find a runner up and the winner. To the right is a runner up by Tom Slattery.

After the votes came in my logo was chosen [Image left]. For the Dark Sun NetLogo I took Steven Bell's great world map of Athas and used a bit of Corel Photo Paint to do some graphic magic(ha!). It was 1999 at the time so hopefully the style and use of lens flare can be forgiven.

Part of the stipulation of being an Official site was that we were to only host 3rd edition D&D material. As such our first project was updating Dark Sun for the 3rd edition. Athas.org was privy to some never before released material which we would get to after the 3rd edition rules were hammered out. Over the course of the next couple of years the 3e rules were put to the test and released piecemeal for testing by the staff at the BWoA. This was an ongoing process and the current document is complete, minus images.

Around the same time, early 2000, Dave Ries-Clark released a small program called The Merchant's Calendar. It is a small Windows based program that helps make sense of the Athasian calendar. This great program also tracks the phases of both Ral and Guthay, the moons of Athas. You can download it here.

In 2002 Neverwinter Nights came out, a great CRPG. One of the outstanding aspects of NWN is that players could create their own adventures and persistent worlds with a built in DM Client. It wasn't too long before people started making Dark Sun mods and putting up adventures and persistent worlds. While many have fallen to the side Athas Reborn is still up and running. 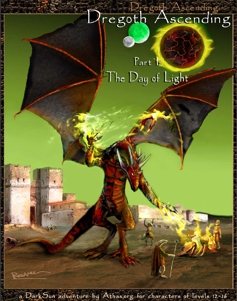 Over the years after the DS3 rules were released Athas.org  produced 16 rule books, supplements, and adventures for 3e over the years, including the 3 part Dregoth Ascending adventure, pretty impressive for a group of fans.

Anything after the announcement of Dark Sun for 4th Edition Dungeons & Dragons I'll consider as "current", which will get a series of Digital Dark Sun articles. For now, I'll leave you with these questions, which you can answer in The Arena Forums.